JavaScript dominates, but Rust is still very fashionable: its use has almost quadrupled in the last two years

A new survey of more than 20,000 developers shows the growth in programmers of that language and also in others such as Python or Java. However, there is one that is becoming a unique phenomenon: Rust has nearly quadrupled its users in the last two years.

Remarkable growth in almost all languages

The language created by Mozilla —much more famous for the Firefox browser— not stop gaining followersand it does so by proving that it is a language that developers “love” year after year. 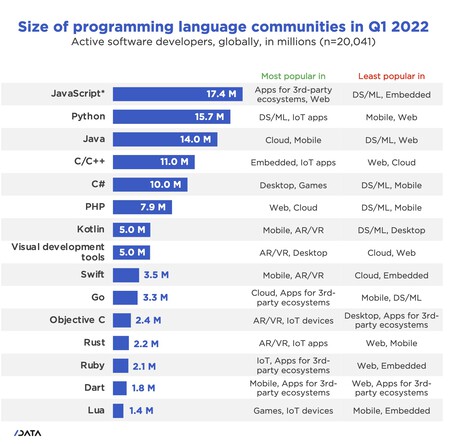 Rust, which took its first steps in 2006, is beginning to be used in a noticeable way on Linux —which had the C language as its absolute reference—, but it is also popular in IoT applications and in virtual reality and augmented reality environments.

That survey also indicates how JavaScript continues to be the protagonist: added 5.2 million users in that same period to reach 17.5 million developers. This position is due to the fact that even though it is not the main language in several segments, it continues to be used in an auxiliary way in many of them.

Python is second in relevance by number of users (15.7M) with particularly strong growth in the last six months. While, PHPAlthough it has grown has done it more slowly than its competitors, and for example C# is also gaining special relevance.

Movistar Plus+ incorporates a new application in the UHD 4K deco

At 38 degrees in May and under a rain of mud: how the haze can bring a Dantesque weekend