Getting into debt is today faster and easier than ever: a financial time bomb that is about to fall

Almost a year ago we talked about how tech companies were heading into shaky ground: easy credit. A trend that has also been taking over traditional banking joining digital credit startups, such as Santander together with Klarna, under the same motto: buy now pay later. The pleasure of the purchase is immediate, the pain of paying for it is postponed.

Spending what you don’t have on what you want was now something traditionally limited to the house and the car at most, then it spread and in recent months that trend has increased and begun to emit worrying signs. Something to be expected in a trend that basically makes consumer credit easier and more instantaneous, as well as ubiquitous.

The aforementioned Klarna, Afterpay, Affirm, Zinia… are the companies behind it. Often integrated into large stores, such as Amazon, and also with ultra-segmented promotions on social networks, with TikTok at the forefront. And if we know anything by now, it’s that pay-it-later schemes drive increased spending. They just need to be perfectly integrated, alliances and segmented advertising through.

Integration in electronic fashion sales stores, one of its great levers of growth

A look at hashtag of Quadpay on TikTok It serves to check the popularity of this service on the platform, often used for the purchase of clothing and fashion items. It’s even part of the jargon for memes.

The Shein phenomenon as the maximum exponent of fast fashion, with a turnover speed much higher than that of Inditex, the previous reference of the term, also contextualizes the boom in demand for instant financing to be able to continue shopping continuously.

Many of these immediate financing proposals are free for the consumer, who does not have to add interest to the price of his purchase if he decides to divide the payment into three or four installments. Furthermore, in a market with a credit card presence as strong as the United States, with the scoring credit as the key that opens or closes possibilities, the option of financing with an alternative outside this score gains attractiveness. The UK is seeing a similar boom.

In practice, this has a direct benefit for the seller: is able to sell more thanks to offering this option, so it compensates him to commission the financial company in exchange for increasing his sales volume. An alternative is to charge interest only when you cannot pay within the default term and need to extend the monthly installments further.

The problem comes when the number of Generation Z people (born between 1997 and 2010 approximately) who are resorting to these short-term loans is multiplied. They spend 925% more now on these services than they did a couple of years agosome fat cows on whose backs influencers of TikTok promote products that increase their sales thanks to this fast financing. A virtuous circle for the cash flow of companies, a potential problem for buyers, who add small terms until they begin to be unmanageable. 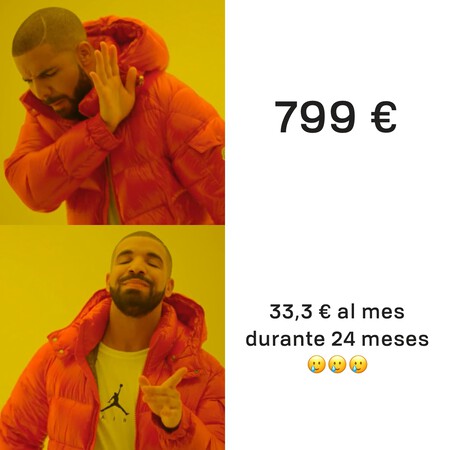 The trend has been consolidating in the United States, but movements such as Santander and Klarna, just a few months ago, may suggest that the idea of ​​a generation permanently exposed to immediate credit offers for online purchases is about to become real also in Europe.

It is not only a business startups allied with large online businesses or traditional banking. Apple launched the Apple Card in 2019 and also put in the hands of its users a tool that is hardly different from other conventional credit cards… except that its interface and its integration with the iPhone makes it even easier and more immediate to defer payments if the amount to be settled at the end of the month becomes too large.

In any case, the progress of these services reaches levels such as published in TikTok split the payment of food goods and other essential goods. It was the work of Quadpay, then renamed to Zip.

Sweden, which smelled blood in 2020, already legislated so that the payment options without indebtedness were the default options, and thus partially drive away the deferred payment proposals that began to populate the payment gateways. Something that is also contextualized by the greater penetration of these services among the young populationsomething given by their lower purchasing power compared to generations with greater experience in the labor market and their greater exposure to online purchases and the advertising of these services on social networks.

With a Scandinavian country, habitually Canarian in the mine, worrying about this issue, we can take it for granted that the European Commission will end up debating proposals to put a stop to this boom Or at least balance it. While that arrives, the future forecasts are of a sustained growth, and figure in almost 700,000 million dollars what this industry will move in 2025. Amazon is already there, some global financial companies such as American Express, VISA, MasterCard or PayPal or have launched or are close to launching their own “buy now, pay later” to prevent customer erosion.

Slots, bingo and games of chance have been around for decades, leaving victims along the way, but it was not until these games of chance jumped to the mobile, twenty-four hours a day from anywhere, when its impact got out of hand. Something similar can happen with deferred payments at the same point of sale immediately: levels of indebtedness soaring that endanger many domestic economies. We are seeing the first signs.

The ‘Lightyear’ flat tire is more than a setback for Disney. It’s a problem for the future of Pixar