If a sailor were to re-enlist today on a container ship after two decades disconnected from the sector, it is likely that he would have a few surprises. The first is the size of the ships themselves, which are getting bigger and bigger and bear little resemblance to those of the 1980s. The second would be the fleet: we have more, many more, ships of more than 100 GT (Gross Tons) than a scant decade ago. And the third, that although tragedies continue to be recorded, the risk of seeing your boat capsize is now much lower than it was just a decade ago.

In short: we have more megaships, bigger ones and fewer casualties.

That is the portrait that leaves at least the latest Allianz sector report. Does this mean that the guild is living some kind of golden dream? Not quite. Despite all the advances in safety, we still suffer from sinking; and, what is equally important: new challenges appear on the horizon.

More boats, bigger. Ships of more than 100 GT are growing and fleets are growing. The data from the Allianz report is clear: according to its calculations, 30 years ago the world fleet of ships with more than 100 GT was around 80,000 vessels. In 2021 there were already 130,000. Today it is estimated that 90% of world trade is mobilized by maritime transport. And the trend does not seem to be reversed. only in 2021 they took care of 561 container ship for 43,390 million dollars.

The funny thing is that we not only have more ships that exceed 100 GT. The ones we use are also larger. The insurer’s technicians calculate that the container transport capacity has grown by about 1,500% since 1968 and has almost doubled over the last decade. Moreover, if in 2011 ships with a capacity of more than 10,000 TEUs represented 5% of the world fleet, five years later already accounted for 25%.

What is the reason for this increase? Basically in search of greater profitability, a reduction in the unit cost of moving each container. What the shipping companies want is to gain efficiency in a scenario marked by a rise in global demand, the pressure for companies to offer more competitive rates, the rise in fuel and also the exploration of strategies that reduce the contaminant footprint of shipments. 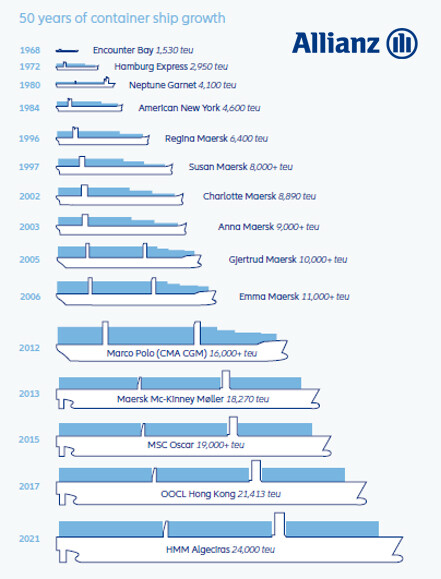 The really important thing: less losses. That’s how it is; despite the fact that we have more ships of more than 100 GT plying our seas today we lose much less than 30, 20 or even 10 years ago. Casualties in the global fleet have been reduced by 57.5% in a matter of a decade. If at the beginning of the 90s the sector lost more than 200 ships a year, today the rate moves between 50 and 75. In 2012, Allianz scored 127 casualties. In 2021 there were already 54, the lowest figure in the last decade.

The explanation? “Increased awareness around security measures, the implementation of training programs, better ship projects, technology development and advances in regulation”, needs the report. Although with ups and downs, since 2012 there has been a general decrease in the main reasons for vessel losses. If a decade ago we suffered about 50 or 70 collapses a year, now they are between 20 or 30. In 2021 there were 32.

The same happens with the second most common type of claim: fires and explosions. From 15 in 2012, the sector has managed to drop to “only” 8 in 2021. The table of misfortunes is basically completed by machinery failures and collisions. The trend is good and invites optimism, but it leaves a negative note. 70 to 32 sinkings in eight years does not mean that almost three were still recorded each month in 2021. And that only among ships of more than 100 GT.

The challenges facing the sector. Not everything is pats on the back, growth and good balances. The sector has remains of draft ahead. And one of the main ones is the one that suggests that it is resorting to increasingly larger ships, especially for the insurers that cover its cargo. “While the number of serious maritime accidents has decreased, incidents involving large ships, container ships and ro-ro vehicles are causing disproportionately high losses,” reflects Allianz.

Throughout the report, the company reviews cases such as the Al Salmy 6sunk in the Persian Gulf; el Ever Forwardwhich ran aground on the east coast of the USA and was stuck for more than a month or the catastrophe of the Ever Giventhe gigantic ship that in 2021 kept the Suez Canal blocked for days, an incident that generated hundreds of millions of dollars in losses.

The “B side” of mega ships. “As ships have grown, risk values ​​have increased, while the environmental bar has been raised. However, regulations, safety management systems and rescue capabilities seem not to have always followed the same rhythm”, Justus Hull points out., by Marine Hull. They are not the only complications left by the “megaships”. Throughout its report, Allianz slips others, such as the cost of rescue maneuvers in the event of a tragedy or even the loss of cargo during the trip.

In March a storm caused the ship Dyros to lose 90 containers and suffer damage to another hundred. Among the causes, different factors are pointed out, such as the cargo being poorly stowed or declared; but also the dimensions of the boats. “Larger ones behave differently. Container stacks are exposed to enormous forces, especially when a ship experiences rocking in rough seas,” she says.

Fires, another concern on the rise. A few months ago, the ship Feliciy Ace made it onto the front pages of half the world’s newspapers due to the peculiar image it left in the Atlantic, near the Azores: the ship burned down with a valuable cargo of some 4,000 vehicles, including Lamborghini, Porsche and Bugatti. just a year before the X-Press Pearl container ship it was also consumed off Sri Lanka. More than isolated cases, the X-Press and Felicity draw one of the fears of the sector: cargo fires, a problem closely related to the “size” of ships.

“The size and design of large vessels makes firefighting very challenging. Fires must be containerized quickly, but it can take several hours to reach the base of a fire on a container ship with up to 20,000 containers on board, stacked ten at a time.” explica Randy Lundsenior maritime risk consultant.

Misdeclared loads, lithium batteries… The other challenges. The size of the ships is not the only handicap that explains the problem. Frequently, another factor that has contributed to fires in recent years is misdeclared cargo in containers, which can include coal or chemicals such as calcium hypochlorite, common in cleaning.

One of the great challenges of the sector —pick up the Allianz report— are lithium batteries, more frequent to the extent that their number increases due to the demand for gadgets that incorporate them or electric cars displace fossil fuel ones in the holds of ships. Just a few months ago the US Coast Guard issued an alert for the risk of lithium batteries. The reason: two different cases of container fires in a short period of time.

“Lithium-ion batteries are a known problem for the sector, where there have been a number of near misses in ports and during transport,” concludes Régis Broudin of AGCS. “Batteries are not only a potential cause of fire, they also exacerbate the problem: they are very difficult to extinguish and have the potential to reignite days or weeks later.”

EA is looking for a company interested in a sale or merger, according to Puck. These are the companies you have already spoken to

How to react on WhatsApp to the messages you receive