The Renault diamond is one of the most iconic logos in the automotive market. In fact, with one version or another, the French firm’s rhombus has been with us for almost a hundred years. But, like many other brands, it wasn’t always like this. Let’s say, for example, that Renault led by brand image a tank. A tank?

Yes. And the fact is that the history of Renault dates back to the end of the 19th century. Specifically, Louis, Marcel and Fernand founded the Renault firm in 1898. And as brothers they adopted their surname to give the brand its name. For the logo, they chose two interlocking R letters in the center of a medallion.

Over time, the logo changed and took the rhombus shape in 1925. Before, during those 27 years, the reference image of the French firm served to interpret the grill of a car or, without going any further, the car itself. But in 1919 he went one step further. Every Renault leaving the factory was associated with a tank. 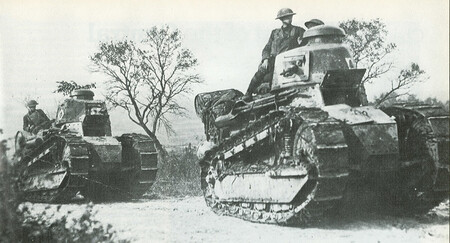 As soon as we pay attention to the date, we can get an idea of ​​​​why Renault began to use a tank as the watchword of the firm. Earlier, in 1906, the firm had already used its logo as a tribute to a vehicle. And, as we shall see, it would not be the last.

That year, in 1906, the Hungarian Ferenc Szisz managed to win the first French Grand Prix of history On board your Renault AK, managed to cross the finish line first at the Circuit de la Sarthe, which is part of Le Mans. A 103.18 km stretch of dusty roads that had to be driven six times over two full days, for a total of 1,238.16 km. As a tribute, Renault started using an image of the Renault AK in its logo.

The emblem of the French company would remain unchanged until 1919. That year, Renault began using an FT 17 tank as its brand image, in clear tribute to the victory of the allied countries during the First World War which had ended a year earlier.

The Renault FT 17 he arrived on the battlefield in the closing stages of the world war. It is considered the first modern tank, with a turret included for firing and tracks for advancing, serving military interests even during World War II. And it is that Nazi Germany used it as a light vehicle to patrol the occupied streets in part of Europe.

In Spain these French tanks could also be seen. In 1921 the Spanish Government acquired ten of these military vehicles that would go into action in the Rif War and, later, in the Civil war Spanish, being used by the Republican side for the defense of Mérida, Badajoz and Madrid.

Much earlier, in 1923, the brand decided to remove the tank from its emblem and chose to simulate a car grill bearing the Renault inscription. In addition, it would be the first time that French vehicles had this emblem on their front. Two years later, in 1925, the first hint of a diamond would be seen for the first time on a Renault vehicle, an image that has been redesigned but is about to celebrate 100 years of history.

With Chromecast and 55, this Xiaomi Smart TV on sale for €310 less

Recording your boss or co-workers can be legal