Can you imagine arriving in New York by train from Europe, directly from Paris or even London. It sounds crazy, but since the end of the 19th century we have had a megaproject on the table that, with push and pull, periods in which it seems to gain strength followed by others of absolute halt, would allow just that: a revolutionary land connection between Eurasia and America.

The key to achieving this is actually in a “small” section – small given the scales, understand – that does not reach 90 kilometers: the Bering strait, the strip that separates Russia and the coast of Alaska, in the USA. If it were possible to bridge that distance, its implications would be so great at an international level that there are those who already refer to it as “The Intercontinental Bridge of Peace”.

A great step of just 90 kilometers. The Bering strait It is a strip of shallow sea —between 30 and 50 meters— which at its narrowest point is less than 90 kilometers and separates the chukotka peninsulasin Russia, and Seward, located on the western coast of Alaska. Its waters serve as a gateway between the Chukotka and Bering seas and in the center are home to a tiny archipelago, the diomede islands. Seen on the map, it looks like a small cut in the middle of the Arctic Circle, but if we managed to “suture it” we would be uniting two continents.

Its enormous strategic potential was clearly seen at the end of the 19th century. Around 1890 the Governor of Colorado, William Gilpin, made a proposal as ambitious as it was ahead of its time: to lay out a Cosmopolitan Railway, a rail system that would encircle much of the world and have its center in Denver. To achieve this, he proposed to save the Bering Strait.

Gilpin did not have much luck in his endeavor, but the idea was attractive enough for others to pick up the slack. Shortly thereafter he theorized about the infrastructure Joseph Straussthe “father” of Golden Gate from San Francisco; and around 1904 a US railway organization proposed to build a tunnel between the two continents, from the Welsh capes to Dezhnev. 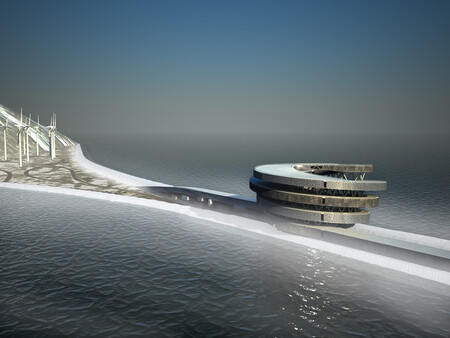 An infrastructure backed by the Tsar. In 1905 the Tsar himself Nicolás II came to give his approval to the project of a bridge across the strait. His goal: a trans-Siberian rail route connecting the Russian Empire and the US through Alaska and Chukotka. To drive the initiative —it needs Russia Beyond— the allocation of between 250 and 300 million dollars was envisaged.

However, the convulsive future of the 20th century made it difficult for that project to jump from paper to reality: the russian revolutionsthe outbreak of the First World War, the emergence of the Soviet Union… hampered the possibilities with which the project could start in 1905.

Although the scenario was not the most favorable, and of course the Cold War neither did it favor him, the reality is that the project never died. Not quite, at least. In the second half of the twentieth Tung Yen Lin introduced the plans for an 80 km “Intercontinental Peace Bridge” and during the first two decades of the 21st century the project has been taken out of the trunk from time to time, fueling debate and – most importantly – preventing it from fading altogether. Even a competition was organized with ideas to unite the islands of the strait, one Russian and the other American.

The latest moves. You don’t have to go back too far in the newspaper library to find news about Bering’s project. In 2007 the German magazine The mirror echoed of the ambitious Moscow-backed proposal for a tunnel under the strait, from Siberia to Alaska, to bring oil and gas to North American markets. The plan, promoted by a consortium of Russian companies, contemplated opening a tunnel of about 102 kilometers, which, in addition to oil and gas pipelines and a fiber optic cable network, included a high-speed train line.

The final idea of ​​its promoters and the Kremlin was that a traveler could travel by train covering three quarters of the world, from New York to London via Canada and Russia. That was at least the official approach. Even then, some skeptics interpreted that movement, however, as a strategy to put pressure on Europe and show it the possibility that its valuable energy supply could be directed to new markets.

Years later, in 2015, Russian Railways planteaba a huge Trans-Siberian highway that would link Russia’s eastern border with Alaska through——surprise!—the Bering Strait. The project was named Trans-Eurasian Belt Development (TEPR) and, in a certain way, collected the baton launched years ago by the Russian authorities. “This is an interstate project, between civilizations,” pointed out Vladimir YakuninPresident of Russian Railways. His new highway would connect Russia with North America through the Chukotka region, deep into Alaska. 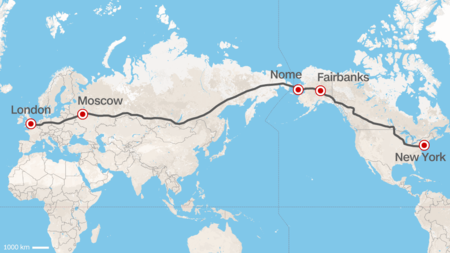 How would the Bering Strait be saved? Since the idea was put on the table for the first time, at the end of the 19th century, both the construction of a bridge and an underground road, similar to the one that since the 1990s has spanned the English Channel. In terms of distances, although the narrowest point of the Strait would be around 88 kilometers, the project raised in 2007 for Russia spoke of a 102-kilometre tunnel built in three different sections.

According to what was specified then, the tunnel works would take about 15 years, to which time the adaptation of the railway system would have to be added. Total, the horizon that was handled in 2011 era 2045. The South China Morning Post points out that of the two possible options —the bridge or the tunnel—, the one that has more possibilities is the underground one. The reason: the strait is in the Arctic Circle and any steel structure would have to face the challenge of withstanding sub-zero temperatures.

How much would it cost? In the case of TEPR CNN spoke would require the disbursement of “billions of dollars”. Some time ago, in 2011, it was even noted that the underground infrastructure with roads, railways, fiber optic network, pipelines for gas and oil backed by Moscow and that included tidal facilities managed a budget of $65 billion.

Much more than a tunnel (or a bridge). If the history of the Bering tunnel —or bridge— makes anything clear, it is that it is considered much more than a simple infrastructure to link two countries. Its strategic character and international impact was already made clear by Gilpin himself in the title of the book in which he outlined his ideas, “The Cosmpolitan Railway: compacting adn Fusing Together All the World´s Continents“. The new highway would link America and Asia and open a direct land route between the US and Russia. How do you recognize the South China Morning Post Fyodor Soloview, of InterBering, one of the most favored would be China, which would thus enjoy a new channel for its exports.

Infrastructure advocates say the Bering link could channel about 8% of world merchandise trade and encourage the development of now deserted areas. There are even those who see benefits in a geopolitical key. “Ensuring the smooth flow of rail traffic, customs control, security in all parts of the railway, bridges and tunnels and other regular cooperation would significantly improve the chances of peace,” reflects Soloview.

An ambitious project… and full of challenges. The project, of course, also faces important challenges. The first and clearly evident is its tremendous technical complexity. Whether one solution or another is chosen, whether or not the archipelago that opens up in the middle of the strait is taken advantage of, the challenge is enormous: to bridge a distance of more than 80 kilometers —and that at its narrowest point— in the middle of the Arctic Circle, with conditions that already input greatly limit the months of the year during which the works can be carried out, with a cost that is also billions of dollars.

Beyond the strictly technical and financial aspects, there would have been Another questions just as tricky. What would be the environmental impact of the infrastructure? Is it worth facing a work like this when there are other transport options, such as the plane? To what extent does the current scenario, marked by the War in Ukraine, affect a project that has been marked in the past by the political context and failed to get unstuck even after the Cold War?

The seven best refurbished bargains from El Corte Inglés: laptops, smart TVs, mobile phones and more with up to 54% off

A small phone and a great gift: buy the Xiaomi beast 12 and get the Watch S1 Active smartwatch for free for a limited time