They create a liquid rocket engine completely manufactured in 3D

With the name of Phoenix, the Australian company Gilmour Space has presented its 3D printed product in society and has shared videos of the tests of its operation.

Gilmour Space, an Australian launch services company known for its orbital-class hybrid rocket technology, has filed a new 3D printed liquid rocket engine which will propel the third stage of its Eris rocket into orbit. It is a regeneratively cooled liquid oxygen/kerosene engine.

“Eris’s first and second stages will be powered by Sirius, our large hybrid rocket engine that is undergoing qualification testing,” Gilmour Space CEO Adam Gilmour said. “Eris’s third stage will be powered by this new 3D-printed liquid rocket engine, called Phoenix, which we developed to provide the additional performance needed to deliver a substantially larger payload to orbit.”

The company has shared a video of a successful 190-second mission duty cycle as a litmus test for its new engine. Eris is a rocket that will be made up of three stages. It will serve to launch small satellites into low Earth orbit and its maiden launch is scheduled for the end of the year.

If nothing changes, it will be launched from the Bowen orbital spaceport in northern Queensland, Australia, pending regulatory approvals following these trials.

In this news, the most remarkable thing is having made the manufacture of the propellant by means of 3D printing. Liquid rocket engines are more prevalent than you might think. For example, the famous company Space X also uses them. 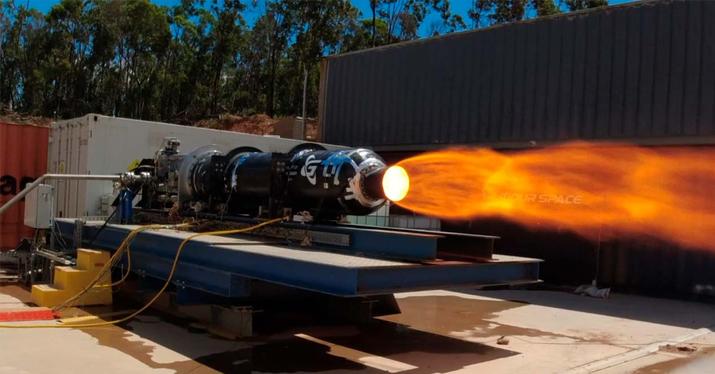 Rockets produce thrust by burning propellants and expelling the products (gases) of combustion from the engine. In the case of liquid rockets, they have the advantage that their reasonably high density allows the volume of propellant storage tanks to be relatively low, and light centrifugal turbopumps can be used to drive propellant from the tanks into the chamber. combustion, which means that propellants can be kept at low pressure.

Liquid rocket engines are notoriously complex and expensive to develop, so this could reduce costs while testing reliability. “With this key test, we are proud to say that Gilmour Space has demonstrated sovereign capability on two different rocket systems,” said Gilmour.

The idea of ​​the liquid-fueled rocket as understood in the modern context first appears in the book “The Exploration of Cosmic Space by Reaction Devices” by the Russian school teacher Konstantin Tsiolkovski. This treatise on astronautics was published in May 1903, but was not distributed outside Russia until years later.

For Samsung, its best televisions of 2022 are the Neo QLED 8K, and not the QD-OLED. These are your reasons

Movistar Plus + recovers a channel and passes another to high definition

Why do airplane windows have a small hole at the bottom?