The closest thing to Venom in real life: they create a magnetic slime robot capable of moving and swallowing objects

This magnetic slime has been created with the idea of ​​entering our body, moving through it and looking for objects. An idea that can save lives but that is horrifying to imagine, especially after seeing the video where its viscosity can be seen. It is not just any slime, but a revolutionary robot created by the renowned professor Li Zhang from the Chinese University of Hong Kong.

The research was published a few weeks ago in the journal Advanced Functional Materials and it is considered a milestone in the development of these robots based on ferrofluids, because in addition to being able to move to where we are interested, it is also able to change and adapt its shape to swallow and carry small objects.

About the size of a ping pong ball

We recommend watching the video of NewScientist that we link right on these lines where you can see how the slime-robot moves and reacts. We have a ‘soft robot’ with very particular viscoelastic characteristics. A slime the size of a ping pong ball that has been built from magnetic particles of polyvinyl alcohol, borax and neodymium.

In other words, we do not have a rigid slime robot, but rather particles that can be controlled by magnets and reach a speed of up to 30 millimeters per second.

The initial shape is a drop, but it can take other shapes such as a ‘C’ or an ‘O’ to surround and end up engulfing small objects. As the creators explain, you can squeeze into corners as small as 1.5 millimeters and stretch up to seven times its original size. It is also self-healing, which means that it can be stretched and connected later on other sides.

The particles are originally toxic to the human body, but Li Zhang’s team has surrounded them with silica to make them technically safe. As he explains to The Guardianthe objective is to use the slime to introduce it into the body and be able to catch magnetic balls that may have been ingestedhow has come to pass. 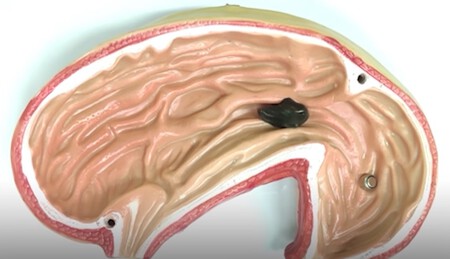 The creation of this substance was inspired by the Marvel character, Venom: “When we saw Venom, we felt that this ability was what we wanted: to find something with a good deformation capacity and a good adaptability to the environment. We started from there to find the material and then we made it into the slime robot,” explains Sun. Mengmeng, one of the authors of the study SCMP.

Flexible slime-shaped robots have been around for a long time, but this is the first to bring together different abilities such as moving, getting into tight spots, changing shape and magnetically grabbing other objects. An investigation that it still has to take steps forward to ensure its possible use for medicinebut whose physical properties are most striking.

If autonomous driving wants to succeed, it has a great challenge ahead: stop running over cyclists

Cloudflare has gone down and, with it, half the Internet has collapsed [actualizado]

Maldives fears being swallowed by rising sea levels. His plan: a floating megacity for 20,000 people