Tesla has opened 116 superchargers where there are fewer electric cars. and it makes sense

We can already see non-Tesla vehicles filling their batteries in their superchargers in our country. At least in thirteen locations scattered throughout Spain that will allow the batteries to be recharged in any vehicle with the CCS standard at speeds of up to 150 kW. What do users and brand earn?

The pilot program. He started in the Netherlands, went to Norway and France. And now Spain, Belgium, Sweden, Austria and the United Kingdom are joining. In all these countries Tesla has already opened part of its network of superchargers to any electric car. The goal: to increase business channels.

The advantages. For Tesla, the advantages are obvious. Opening the possibility to a large number of users to use your services opens the door to extra income that will be welcomed by the company. In addition, the possible rejection of their use will be less, since in Europe they have been forced to use the CCS standard (the most widespread) and those who want to charge in them will not have to use an adapter, which reduces the barrier to entry.

The risks. Tesla’s great risk is in the face of its own public. Until now, one of the advantages of the brand was that its customers knew that, at least for now, they would have a free supercharger to use wherever they went.

Premium. Now, that advantage is losing strength and for many drivers, having just a dozen superchargers in their country can already be an oxygen balloon on their trips (as in Spain). Of course, those who want to use it will have to pay it at the premium service price. In our country, it will be necessary to opt for a monthly subscription of 12.99 euros/month and charge at the price of Tesla users (0.43 kW/h) or, without a subscription, assume variable charging prices with averages, according to Tesla , of 0.64 kW, so the price may be higher.

Namely, Tesla makes sure to maintain its premium brand image and may discourage drivers from flocking to its superchargers. It offers the virtues of its service and will be in the minds of travelers but it is very likely that many will opt for other companies with lower prices. It is a balance game to avoid saturating the stations and penalizing their consumers and, at the same time, obtain a great benefit from those who do opt for their outlets. 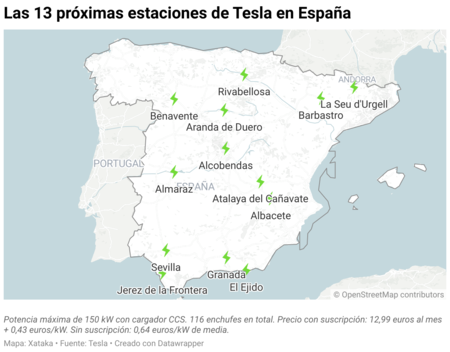 spain. In our country, Tesla offers 13 locations with superchargers that you can see on the map above. There are 116 public sockets strategically distributed to support the major roads that leave from Madrid. Only the one in Barcelona lacks a supercharger halfway, the rest of the radial tracks will have their own support.

As we can see in Electromaps, Tesla has known how to choose its support points. The province of Cáceres only has two 150 kW chargers available outside of Tesla and none are on the main road, the A-5. To get to the outskirts of Cádiz on the A-66, there are only three non-Tesla chargers with the same power. Between Madrid and Valencia, there is only one alternative to the North American company with the same speed. 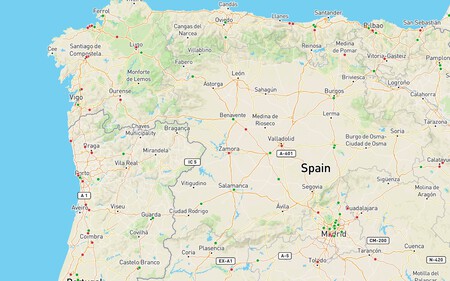 The stop in Benavente on the way to Galicia gives oxygen to one of the most soulless routes in Spain if we talk about loader density and the one in La Seu d’Urgell allows loading at the border with Andorra and in a key place to reach faster routes, taking into account the orography of the terrain. There are only two big holes in Tesla’s map, the Toledo-Ciudad Real-Córdoba and Jaén road and the surroundings of Teruel and Zaragoza.

Support points. Analyzing the chosen locations, it seems that Tesla is very clear about the audience it is targeting. Barcelona and Valencia will not have superchargers open to the public and for the one in Madrid it will be necessary to travel to Alcobendas. Seville is the other big city that will have a supercharger open to any car, but it makes sense as a support for those traveling to some coastal point in southern Spain.

The rest of the available Superchargers serve as small stops to reach a final big destination. In large cities, such as Madrid, Barcelona or Valencia, the competition is greater and it is more logical to keep these recharging points for their own users. In the middle of the road, with few alternatives to the brand, Tesla can afford the effort that other vehicles occupy its sockets.

More than anyone. Tesla boasts in its announcement that it is the largest fast recharging network in Spain. And if we stick to the data published last February, the 13 stations that Tesla opens throughout Spain represent more than 10% of those existing in our country. So we calculated that only 109 charging stations had plugs greater than 120 kW and in this count the superchargers that Tesla had available were already included.