What happens if a spaceship or rocket explodes on Earth

The human being has been trying to explode beyond the Earth for more than half a century, launching manned ships into space. All the material that is used for it (as well as parts of other ships and/or satellites) can end up orbiting around our planet, and it is even common that from time to time explosions occur. This could have some important consequences, and here we tell you about them.

I’m sure you’ve seen one of these launches, where the ship in question is propelled by a huge column of fire until it gains kilometers of altitude. This process lifts a large quantity of materials into space, and these gradually detach from the ship, which is where the crew is. Some of them get to leave the planet, and when they detach it is possible that they remain orbiting the Earth for years, although this is not the only thing that happens.

The danger of space debris

As we say, it is quite common for some parts such as engines or loose parts of ships to be suspended in the space surrounding the Earth. The normal thing in this case is that these pieces end up falling somewhere on our planet, something that, although we try to avoid it so that damage is not caused, is sometimes inevitable. The most recent example of this type of event was seen just a few days ago, when several fragments of what looks like a Chinese rocket fell on a rural area of ​​​​India.

These fragments we refer to are anything but small. We are talking about hollow metal spheres about 50 centimeters in diameter and 5kg dough. Luckily, none of these materials “landed” near a house, so no victims had to be mourned. 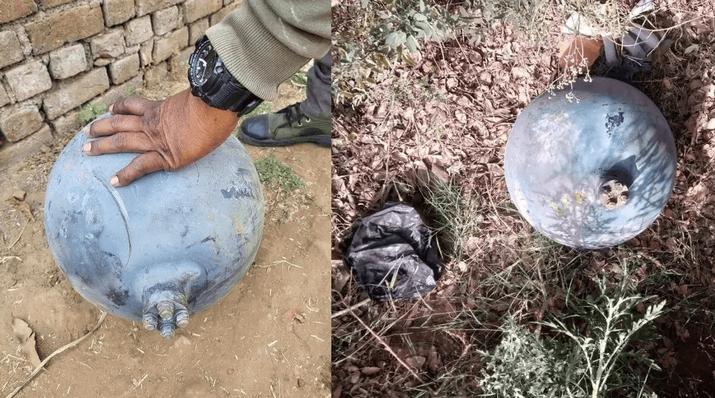 This is how the spheres appeared in India (The Indian Express)

But what happens to what remains orbiting the Earth? It is common for pieces of all kinds to remain “floating” in space, aimlessly. These normally do not usually harbor too much danger, but it may happen that some of them end up exploding. That is what happened to a Russian engine that had been in orbit for 10 years, and which exploded for unknown reasons. In doing so, a cloud of debris was released and ejected, aggravating the huge problem of space debris and which affects what is known as the Kessler effect.

What is the Kessler effect?

The Kessler effect was theorized by Donald J. Kessler, a NASA space debris expert. According to Kessler, space debris is and will be a serious problem in the future, since its collision with each other always generates more space debris. As there is a greater amount of this, the probability that space debris ends up colliding with any of the satellites in space increases, being able to finish even with the destruction of some of them.

The main problem with this is that it is impossible for it to be solved naturally without the human being doing something to remedy it. It is true that the engines used in today’s launches are designed so that this does not happen, but we currently have several of them similar to the Russian one that have exploded in space (54 would have already exploded before). The Space Surveillance Network is continuously tracking any element that may collide with a satellite or ship, and, in addition, there are already plans to start neutralizing space debris like the Teide laser.

Spain wants to extend its paternity leave for single-parent families. but it has a hole

Photoshop’s most underrated and least known tool, according to a professional photographer

Photoshop's most underrated and least known tool, according to a professional photographer

Microsoft presents a miniPC with ARM processor: this is Project Volterra

The AEPD fines Google with 10 million euros for violating the RGPD. She is not alone: ​​there is also a sanction for Vodafone