This morning, the Community of Madrid alerted eight patients with symptoms “clinically compatible” with monkeypox and announced that the necessary measures were being taken to rule out this infectious disease. It is not for less: it is a rare ailment (and much less serious than the old smallpox), but it can cause serious problems. But beyond that, it is the protagonist of one of the rarest epidemiological outbreaks so far this decade. And that is a lot to say.

What’s going on?. On May 7, 2022, the English NHS detected a case of monkeypox in a patient who had recently traveled to Nigeria. So far everything normal. It’s something that has passed in the United Kingdom in 2018, 2019 and 2021. The problem is that seven days later, two others were found with no apparent relation to the original case. To date, there are seven cases located “without connection to the previous ones (although two of the four had common contacts) or travel history.”

This is strange. Fernando Simón, director of the Center for the Coordination of Health Alerts and Emergencies, said this morning that although “monkey pox is a serious disease, the knowledge we have [nos dicen] which is self-limited outbreaks”; that is, there are usually no large population outbreaks. However, the data from the United Kingdom are so “rare and unusual” that the director of the United Kingdom Health Security Agency admitted that the evidence suggested that there was community transmission.

Must take into account, as explained in SMC Spain, that the longest documented chain of transmission known is six people. For this reason, the appearance of cases throughout Europe (in addition to the Spanish, Portugal has just confirmed three cases in Lisbon and another 15 more under investigation) has researchers disoriented. 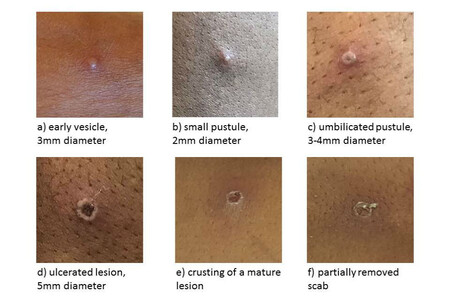 What exactly is ‘monkey pox’?. It is a virus of the smallpox genus (Smallpox virus) which, despite its name, is usually transmitted by small mammals such as rodents. This is important because it will be key when it comes to finding a possible contagion vector. This contagion requires direct contact with blood, fluids or open lesions.

In humans, as we say, transmission is limited. Moreover, of the two major strains that we know of (the one from West Africa and the one from the Congo), the one that has been found so far in the United Kingdom is the first, the least virulent and also the least contagious. We talk about “fever, myalgia, inguinal lymphadenopathy (swollen glands), and rash on the hands and face, similar to that of chickenpox.” But, above all, we are talking about a mortality rate of 1% (compared to 10% in the Congo).

A growing disease. The virus was first found in macaques in 1958 and was closely controlled for decades. The problem is that this “control” It was due, to a large extent, to the cross-immunity conferred by the smallpox vaccine. As that immunity has been disappearing (because, to the extent that smallpox is eradicated, new vaccines are no longer given), that of the monkeys has been growing outside and inside the African continent.

What can we expect from this outbreak? The first time cases were found outside of Africa was in 2003, there were 47 cases originating by a group of prairie dogs that had lived with animals from Ghana, sold as pets. That has been the characteristic of all known outbreaks so far: they were very localized. Now that does not happen and, except for a theory that links the outbreak to transmission through sexual contactthere are not many clues yet.

The technological ones before their perfect financial storm: collapses, crypto crash and frozen venture capital

Star Wars fans can breathe easy: ‘Obi-Wan Kenobi’ is a sequel up to the character