The technological ones before their perfect financial storm: collapses, crypto crash and frozen venture capital

last new year’s eve. That was the turning point that marked the beginning of a fall. Those were the days when the S&P 500, the stock market index of the 500 largest companies in the United States and considered the most representative of the real state of the market, peaked before starting to fall.

In that index, whose top positions are monopolized by the big technology companies, one of the first symptoms that something was not going so well in this sector is found. A market correction that has left the 10 largest technology companies in the world by market capitalization in the red so far this year. Both American and Chinese and South Korean: none have escaped this disaster.

The fall ranges from 14% of Samsung, who has better resisted these first months, to 43% that Nvidia has left, who had managed to reach that top 10 in a commendable way. It still trades above Samsung, $80 billion below it, but the gap has narrowed again. The three leaders have resisted somewhat better than the rest, but Apple has lost the lead among the most valuable listed companies in the world, which has once again fallen to the oil company Saudi Aramco. 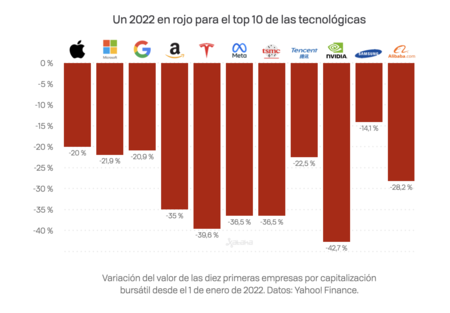 Other technology companies that are listed at lower magnitudes have not had a better evolution either. In fact, for most it has been even worse. In this selection of technology companies outside of that top 10, the very strong falls of PayPal, Netflix, Spotify, Shopify or a Coinbase stand out —75% down in a few months)— which has also suffered another crisis, that of cryptocurrencies, which has been going on for months chaining falls and have dragged the most famous exchange house. 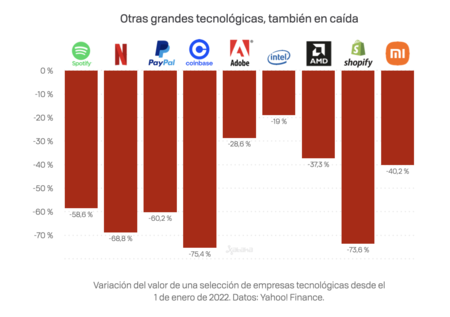 And other companies such as Zoom (-85% from maximum) or Peloton (-91%), boosted by confinements and remote work, have also suffered very strong falls as the return to post-pandemic normality. What COVID gave them, the vaccine took away.

A situation that has caused what might seem like anomalies in a trajectory of five years of sustained growth: big tech companies that can’t hire the professionals they need or have decided to postpone those recruitments. The one known as hiring freeze. Facebook sounded the alarm a few days ago by announcing that they would need 10,000 new workers to build their metaverse, but that they couldn’t afford to hire them. Three days later, the CEO of Uber spoke of hiring as “a privilege”. Netflix is ​​also preparing layoffs and adopting a discourse that induces voluntary dismissals.

Layoffs in startups and venture capital in decline

If the big ones are slowing down or pausing new hires, in smaller companies and startups The time has come for mass layoffs. Layoffsa layoff tracker for the American technology industry, has been collecting the thousands of layoffs accumulated in 78 startups so far this year.

Some of the most outstanding: Carvana (and their firings via Zoom), Zwift, Reef, Vroom, Send, At home. Even Cameo, a platform to buy personalized videos to celebrities, usually used to congratulate a birthday sarcastically with a celebrity gone down, also discovered that it does not have a market to support 400 employees. In any case, unprecedented layoff figures since the first months of the pandemic. Right now that normality is returning. 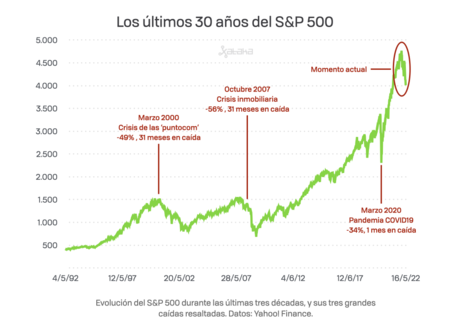 A situation that also has to do with venture capital that is increasingly cautious in its movementswhich has turned off its tap to the detriment especially of the companies oriented to the growth of users postponing the concern for their income, a constant in the last fifteen years. Consequences: twice as many technology companies announcing layoffs than a year ago, 80% fewer IPOs by startups, and a 10% drop (at the end of this quarter it will be much more) in venture capital financing. Masayoshi Son, CEO of Softbank, said that his investments in startups will be reduced between 50% and 75%.

Reasons: inflation shooting up on both sides of the pond, a country with 7,000 nuclear warheads invading another and threatening several more, and rising interest rates after years in the negative. In addition to all of the above with stock market crashes. Too much uncertainty, bad indicators and worse omens as to be optimistic with investments. Europe tends to react with some latency to movements in the United States, so we could see similar scenarios with layoffs and frozen hiring in the coming months.

The pandemic brought several economic decisions, one of the ones with the greatest impact was that of America starting to print more dollars than everand thus there happened to be 4,000 billion (yes, billion) in circulation in January 2020 at 20,000 billion at the end of 2021. In other words, 80% of the dollars in circulation were printed in the last two years. A behavior praised by the modern monetary theory, who believes that monetizing the public deficit increases economic prosperity, but tends to give wings to inflation until it rises so high that it is impossible not to see it. How did it happen.

Precisely one of the arguments in favor of cryptocurrencies, especially Bitcoin for being deflationaryera serve as a reserve of value in high inflation scenarios that decrease the value of money. In this first stage, with inflation on the rise, this has not been the case, although it is unknown what its price will be in dollars or euros in a while. A million, a few, or the current thirty thousand. Heads, tails and edge.

In the cryptocurrency market there are currencies that go quietly and others whose collapse makes all the signs jingle. wallets. The latter is what has happened in recent weeks with Terra and Luna, a stable cryptocurrency and its token brother, hence the satellite name. A moon was worth $85 on May 4. Today it is worth 400,000 times less. It is not a hyperbole.

The fall is bad news for its investors, but also for the bulk of the market for the consequences that this may have. A few weeks ago the cryptocurrency market capitalization was above 2 billion euros, according to the ECB. Double that accumulated by junk mortgages in 2007, before everything exploded.

We come from a bull market, both cryptocurrencies and technology stocks, as well as venture capital happily watering the coffers of startups for whom cash flow was a future concern, not a present one. Now cryptocurrencies have fallen between 50% and 80% from highs (some have simply disappeared in a few days), technology stocks are far from their best days and emerging companies cannot find financing without liquidity that until recently could be high school. The spring of the northern hemisphere brought the winter of an entire sector.

The roads of Spain are full of empty radar boxes: this is how they work according to the DGT

There are those who have thought of putting servers on the Moon: they will start testing as soon as this year