There is a lot of talk about autonomous cars, but the truth is that this technology is giving much better news at sea. A cargo ship named Suzaku has achieved complete the first commercial and autonomous journey in the world, and it has done so thanks to preliminary tests and, above all, to an advanced artificial intelligence system.

a promising success. The Suzaku ship was carrying a load of 749 tons and has traveled 491 miles (790 kilometers) without human intervention for 99% of that journey. The trip, which lasted 40 hours, had its origin in Tokyo Bay and its destination in the port of Tsumatsusaka in Ise Bay.

Welcome Orca AI. The secret of this success is in the artificial intelligence system used on the way. Its name is especially apt: Orca AIand it is a development that makes use of eighteen cameras that provide a 360º vision —but not LiDAR, as they say in Tesla— with which it is possible to offer detection, tracking, classification and distance estimation with other ships and obstacles in real time.

The system has been training for this route for a year, and that allowed it to successfully cross one of the most congested maritime areas in the world. During her voyage, the ship autonomously performed 107 collision avoidance maneuvers, avoiding 400 to 500 ships.

A potential revolution.. Projects surrounding autonomous ships are less well known, but have also been in development for some time. In 2018, Rolls Royce’s maritime division collaborated with Intel to create the Falcona conventional ferry to which it added that artificial intelligence “kit” to give it autonomy in navigation.

Last year we already talked about “barcotaxis”, and the Norwegian company Yara International has also prepared its Yara Birkeland, its first autonomous and, attention, electric cargo ship. The ideas here are also varied, and it is shown by the IBM Mayflower that wanted to cross the Atlantic autonomously and being powered by solar panels.

… with challenges ahead. Other companies such as the South Korean Avikus propose the same revolution, although the systems, they affirm en Nikkei Asia, are not yet prepared for long journeys without some kind of human assistance. There is another problem: international regulations, which must be updated before this technology can be widely implemented.

The European Union already contemplates that future, and has a operating guide for the so-called Maritime Autonomous Surface Ships (MASS). On it is also the International Maritime Organization (IMO), the United Nations agency responsible for protecting the marine environment. This body even defines four levels of autonomysimilar to those used in cars. 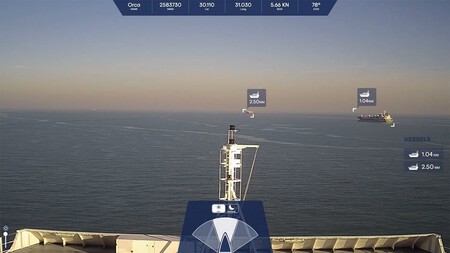 All are (or seem to be) advantages. According to a allianz study, maritime accidents are caused in 75-96% of cases by human error, and autonomous navigation technology could make such trips safer. In addition, he indicates, this type of system is capable of following navigation routes more precisely, which also helps save fuel. And then there is the other: the costs associated with the crews would be significantly reduced, although a serious potential problem would arise due to the unemployment that these systems could generate.

holidays at sea. These systems are not only very interesting for the transport of goods, but also for pleasure trips. Some 500,000 pleasure boats are built a year, and there is therefore an opportunity to equip them with these systems and allow their owners not to have to invest time and money in obtaining the PER (Patrón de Embarcaciones de Recreo), the popular title to be able to navigate with this type of ships.

Be careful calling a number that starts with 704: it’s not free

Be careful calling a number that starts with 704: it's not free