Leaving a WhatsApp group without everyone knowing is not possible. That’s about to change

“Class of 2012”, “Juan’s house barbecue”, “Fathers and mothers school whatever”… what do they have in common? What are WhatsApp group names in which we are, we do not participate and from which we would like to leave if it weren’t for the fact that all the participants were going to see a magnificent “Parakeet left the group” as soon as they did

Let’s call it social pressure, let’s call it whatever, but the reality is that WhatsApp is a bit of a sneak when it comes to leaving groups. Nevertheless, that seems to be about to changejust as you have slipped WaBetainfothe well-known WhatsApp feature leaker. 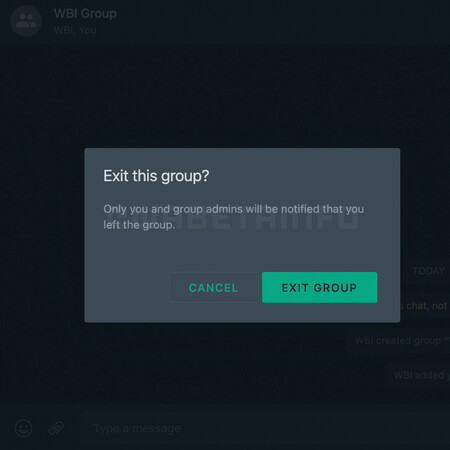 This is the message that will appear when leaving a WhatsApp group.

The truth is that the function does not have too much mystery. As the WaBetaInfo screenshot shows, in a future version of the app (we don’t know which one or when it will arrive) it will be possible to leave WhatsApp groups in -almost- ninja mode, quietly, without making noise and without everyone knowing.

And why in -almost- ninja mode? Because group administrators will be able to see that you have left. This is a function that, far from being important for day-to-day groups, is designed for communities, that kind of macro-groups announced a long time ago and that are yet to arrive.

The screenshot of WaBetaInfo has been taken in WhatsApp Desktop beta, but it is expected that if it reaches the desktop version do it also to Android and iOS versions. A matter of waiting, we already know that WhatsApp functions take time to arrive.

Netflix is ​​still looking for solutions to its drain on subscribers. Next Idea: Live Streaming

There will be a fourth dose of the COVID vaccine for everyone in the fall, according to Health