The B side of buying an expensive Android: they lose up to 50% of their value in a few months

If you want to get a few euros out of your phone when selling it to buy another one, perhaps the best option is an iPhone. Five years ago we talked about the rate at which mobile phones are falling in price, with a trend that has been maintained over time.

Recent studies suggest that depreciation continues to hit the high-end Android, with up to 50% drop in the first months of life of phones, compared to just a 16% drop in the case of the latest iPhone. 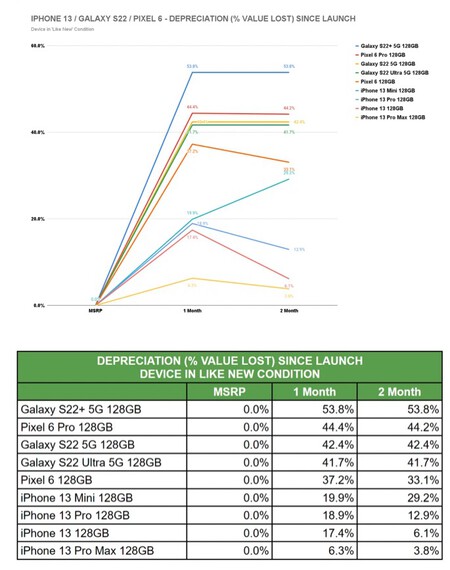 SellCell data points to a sharp depreciation at the high end of Samsung and Google. Specifically, flagship models such as the Galaxy S22 lose more than 50% of their value, compared to 44% in the case of models such as the Google Pixel 6 Pro. The figures refer to models on the second-hand market, Sold in “like new” condition.

Just walk through HTCmania or Wallapop to check this data in Spain.

Although the study data comes to us from the United States, a visit to Spanish forums and sales portals is enough to verify that Android depreciation continues to be surprisingly fast. The S22 are already close to 600 euroswhile it is difficult to find an iPhone 13 that drops below 700. We are not talking here about those figures close to 50% depreciation, but that extra drop in Android models is accused.

New PlayStation Plus: Sony confirms the date of arrival in Spain and the catalog of games

New PlayStation Plus: Sony confirms the date of arrival in Spain and the catalog of games

The Vivo X80 Pro arrives in Spain: price and availability of Vivo’s flagship and its photography with ZEISS

I have seen a series on linear television again eight years later. I don’t think I’ll do it again