Spring is over and, in fact, it will be over in a matter of days. If the normal thing at this time of year is that the temperatures are still pleasant with maximums in Barcelona around 22 degrees and in Madrid around 25; this end of the month is going to be anything but normal: during the weekend the temperatures are going to be very high and this is just a preview of what awaits us during the rest of the month.

Don’t call it ‘weekend’, call it ‘convection oven’. It is not something exclusive to Spain, not at all. All continental Europe is about to experience a huge ‘heat wave’ con differences of up to 16 degrees which is normal for this time of year. Seville, which usually has maximum temperatures close to 30, will be at 43 (at the very least). However, the biggest difference is expected in the center of the peninsula, where a true summer will be experienced during these weeks.

What is a heatwave’? According to the AEMET, a heat wave is “an episode of at least three consecutive days […] during which at least 10% of the meteorological stations register values ​​above the threshold temperature”. The “threshold temperature” in this context everything that is above “95% of daily maximum temperatures of the months of July and August of the period 1971-2000”. That’s nothing. 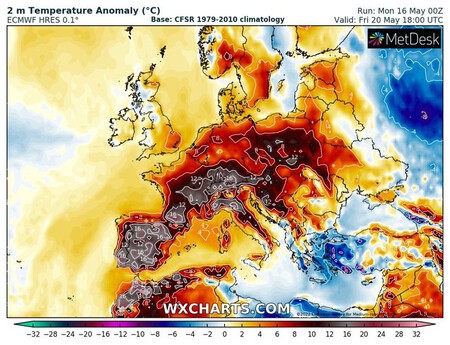 This means that it is possible that it is very hot (a really annoying and dangerous heat) and, however, that we are not in a heat wave. It also means that depending on the place, the thermal threshold will change. In Seville, three days must be given with more than 41 degrees and in San Sebastián, with more than 28.8.

towards an endless summer… The problem, as we have been saying, is that the seasons are blurring. This is especially clear in these types of events. as pointed out Roberto Granda in elTiempo.es, if we look at the first day of the year that exceeds 30 degrees, we will see that for years that day has only come forward. If in the 1960s, it was normal for 30 degrees to be reached in June, in recent decades that limit is usually reached in May. This 2022, they were reached on May 10, in fact.

But the situation does not stop there. The same historical data They point out that the heat is also slowing their march. Here the trend is less solid, but it can also be easily seen how the heat that previously disappeared in early October has been delaying its arc until well into the month. Summer is extending its tentacles until it catches everything.

The first ‘GTA’, from the inside: a look at the creation of this legendary game in a curious video from 1996

The first 'GTA', from the inside: a look at the creation of this legendary game in a curious video from 1996