‘Cities: Skylines’ has prevented Poland from building a flawed road: how video games are helping us improve our cities

There are those who use video games to have a fun time and who, in addition, take advantage of them to improve the planning of their city. It has just happened in Poland, which provides a clear example of what can be achieved with a good simulator and, above all, critical spirit. Making use of ‘Cities: Skylines’ and with YouTube as a speaker, a road fan has shown that the project that the authorities had drawn up to link two ring roads presented some problems. Checking it out, his technicians realized that he was right.

It is not the first time that a video game has helped us plan our cities.

And it is not unreasonable to think that it will not be the last.

What happened in Poland? Basically, what Sr. Piotrpassionate about infrastructures, has forced the General Directorate of National Roads and Highways of Poland (GDDKiA) to step back and tweak its Kraków-Mistrzejowice project, an infrastructure that seeks to connect the S7 and S52 highways, the Eastern and Northern Ring Roads of Krakow. When viewing the project, the person in charge of the YouTube channel Highways of Poland He realized that there were some points that could be improved and decided to use the resources at his disposal to prove it.

What resources? The city building game ‘Cities: Skylines’ and YouTube. Using simulations, the road enthusiast pointed out one by one the details of the project that, in his opinion, would end up causing problems on the new Kraków-Mistrzejowice link. He then uploaded the result to YouTube and encouraged the channel’s users to give it visibility so that it would reach GDDKiA’s computers. The piece It was posted in February and has over 253,200 views.

throughout the videoof almost 12 minutes, the author points out the points of the route with an inefficient design, the areas in which there would be a risk of traffic jams, in which dangerous overtaking could occur or directly those in which there would be a greater risk of collisions or other type of accidents. As they point out in Online gamesit is not clear if, furthermore, it relied on other tools to reinforce reliability, such as ‘Traffic Manager: President Edition’.

And what was the result? Shortly after the release of the video, GDDKiA herself posted a comment in which he explained the data on which he had based the design of the new road and advanced that he had commissioned a larger analysis from the Krakow University of Technology to settle the debate once and for all. “We are waiting for its completion. Once we receive the analysis, we will decide if any design changes are necessary”, he wrote two months ago.

However, when examining data and plans, the experts from the Polish university came to the conclusion that… the fan of ‘Cities: Skylines’ was not far off the mark. As reported Wyborcza, its experts concluded that the new connector did indeed have some points that could be improved and that, if its design was not modified, it would probably end up causing bottlenecks. Specifically, he advocated the redesign of several access roads. 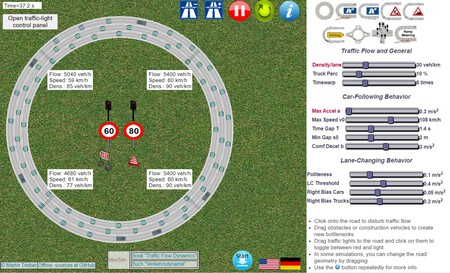 Is it the first time that we take advantage of video games? No. Over the last few years there have been other cases in which video games have helped us improve the design of our environment. some time ago the UN started using ‘Minecraft’ to involve communities in the layout of public spaces, giving them room to contribute their own ideas. Elsewhere, the initiative has been applied in Kenya, Nepal or Colombia. in 2016 there was even a documentary‘My Urban Playground’, on the impact of video games on planning.

Another good example is the benefit that they have taken in Sweden from ‘Cities: Skylines’. There the Swedish Construction Service used the video game to assist in design of a new district of Stockholm. In the Swedish capital they have also resorted to the video game developed by Colossal Order for improve logistics and the design of the city’s public transportation system.

Video games to feel like a councilor. ‘Cities: Skylines’ is one of the most famous, but it is certainly not the only game that can help us reflect on how to improve the environment. ‘Traffic-Simulation’, for example, allows you to check how road designs and elements such as traffic lights, signals, lane closures… affect the flow of vehicles. Others, like ‘Streetmix’allow you to design your own streets, adding bike lanes, sidewalks, more roads, etc.

The list is long and includes ‘Minecraft’ or even ‘Sim City’, which since its first edition for Amiga and Mac, already at the end of the 80’s, has served in a certain way as a virtual laboratory for urban theories. Other titles that help to experiment with the influence on the surroundings of buildings, the urban fabric or transport are ‘Concrete Jungle’ o ‘Cities in Motion’.

What is Russia’s “doomsday plane”: the Cold War aircraft prepared for a nuclear attack

What is Russia's "doomsday plane": the Cold War aircraft prepared for a nuclear attack

Google Chrome and other great browsers for Android